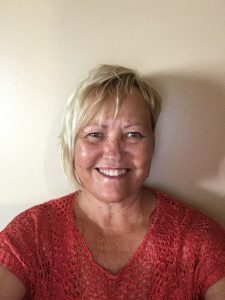 bowl of cherry pits
my grandson tries to guess
my age

Congratulations on having your haiku selected as the top winner in the Canada category in the Vancouver Cherry Blossom Festival’s 2016 Haiku Invitational contest. How did you first learn about haiku, and how much writing of haiku or other poetry have you done?

I came to haiku later in my writing life, and had to unlearn what I had been taught about haiku in school. When I finally caught on to the fact that there is this wonderful world of English-language haiku that goes way beyond counting syllables, I was hooked. I’m captivated by the form, and how much it communicates with so few words. I’ve had novels published, short stories, and a book of poetry, and in a creative sense, have immersed myself in a life of words. But I had to learn to shift from long works to the precision and purity of haiku. I’ve been focusing on haiku for about four years now, and I write and read haiku every day. I love experimenting with the form, including coupling haiku with art and photos, and recently won the multi-media category in the inaugural Jane Reichhold Memorial Haiga Competition.

I’ve written many haiku about the season of blossoming, and all the beauty that spring brings after a frigid Canadian winter. But this time around, I wanted to write something amusing, even ironic or wry. The perfect opportunity arose from a conversation with my six-year-old grandson. Somehow the topic turned to my age, and I found myself deflecting his questions. What would he think if I told him my true age? Could he handle it? Could I handle it? To a six-year-old, twenty is ancient! Can he even fathom sixty? It occurred to me along the way that aging can be the pits, and from there, the haiku was born.

There are so many talented haiku poets, and I recognized many of the names of the other winners and runners-up from reading their work online and in haiku journals. It was a delightful honour to have won, to have my work with theirs. I shared the news first with the Banyan Tree Haiku Writers, an online group to which I belong, and then the Twitter community of micro-poets, an eclectic bunch where there is always a new poem to read day or night.

I’ve taken several online courses from Alan Summers, and recommend him to anyone who wants to learn more about haiku. There are also many fine online and print journals dedicated to haiku and related forms. Reading what other people are writing is a great way to learn, and to be inspired. Some of the journals that I follow that are easily accessible online include Failed Haiku, Sonic Boom, Tinywords, and Cattails. I also belong to several haiku and tanka organizations, including Haiku Canada.

I love to kayak, and spend as much time as I can around rivers and lakes. I grew up on the mighty St Lawrence River, and spent my university years in Ottawa, along another powerful river, the Ottawa River. I studied at Carleton University, and earned an Honours BA, majoring in religion. I worked for many years as a freelance writer, specializing in education and literacy, and still work in the field part-time. I have three young grandchildren, a daughter, a cat, and a husband—not necessarily listed in the order of importance!

I live in Ontario, Canada, a place of four seasons. Nature, and the changing seasons, play a huge role in my haiku. I trek a lot, urban walking as well as walking though woods and on trails. I used to carry a notebook to scratch down those fleeting observations that are the stuff of haiku. Now I speak into my iPhone, which automatically transcribes my speech to written notes, although sometimes the translations are hilarious. In a recent note, “chrysanthemums” had become “Santa moms.” I’m sure there is a haiku or senryu in there waiting to be written! You can sample some of my haiku and other writing at my website, literarykayak.com.