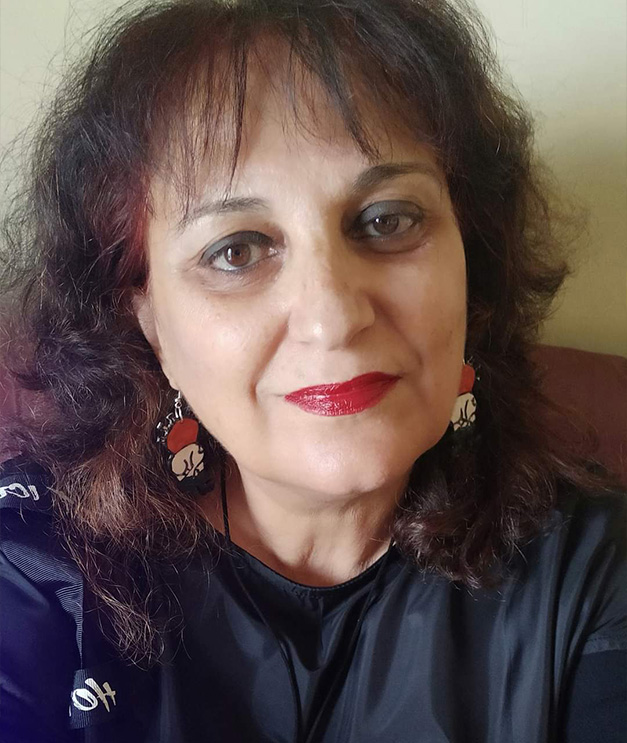 first blossoms—
the child’s eyes
say it all

Congratulations on having your haiku selected as the top winner in the International category in the Vancouver Cherry Blossom Festival’s 2021 Haiku Invitational contest. How did you first learn about haiku, and how much writing of haiku or other poetry have you done?

I am a Palestinian poetess from Nazareth. I have published seven books of poetry, one collection of short stories, and one novel. My first encounter with haiku was in Haifa University where I learned English and general literature. There, I took a course on haiku. I am fond of writing very short poems and also fond of Mother Nature. These facts made haiku very attractive to me. In 2016, I met haiku poets on Facebook. My interest in haiku and haiga [haiku with paintings] began at this point. Robert Wilson led my first steps through adding me to his haiku group. Then I began to investigate the genre in depth by myself. I took part in haiku contests and won first prize many times, which encouraged me to go on. I have also published one book of haiku, Buds of Dream. Later, I opened a Facebook group and called it “Buds of Haiku.” But, because of health problems, I had to close my Facebook account, so another haiku friend took charge of it. Afterwards, I was able to open a new Facebook account and new haiku page, calling it “Buds of Haiku by Rita Odeh.”

The following Vancouver Cherry Blossom Festival haiku selection of mine led to my most recent winner:

cherry blossoms—
a child asks
if they are real

I am still thrilled by the way a child receives the wonders of nature that we have learned to take for granted. We have too often stopped enjoying nature. But, children still perceive nature by their five senses. A real haiku poet is someone who returns to being a child. I am proud to announce that l am such a child.

I advise everyone interested in haiku to read Robert Wilson’s articles about haiku. Afterwards, you can form your own way of writing.

I was born 1960 in Nazareth, Israel, and I now reside in Haifa. I have B.A. in English and comparative literature from Haifa University and used to be a high school teacher for English and creative writing in my town until 2000 when I quit teaching to devote myself to writing. I write poetry, short stories, novels, and literary articles. I am fond of writing short poems, haiku, and tanka, and creating haiga. Many of my poems and short stories, as well as some literary articles and book reviews and translated texts, have been published in a number of journals and newspapers in my country as well as online journals. I was chosen to be a contributor for Daily Haiku in 2008. My haiku have been published in Daily Haiku, Simply Haiku, Tinywords, and other journals. I invite you to follow my own Facebook page, Buds of Haiku by Rita Odeh. I have a page in the Living Haiku Anthology, and I also used to contribute to Daily Haiga. YouTube has a 41-minute video that features my Buds of Dream book. If you Google my name you will find my haiku and haiga on many sites. I also have my own blog.

The way I write my haiku is affected by my understanding of haiku. I used to wonder what it means that haiku shows and does not tell, until I understood that seeing a significant scene in nature makes me stop to meditate over it. It provides me a moment of enlightenment. I just copy the scene into my poem without adding my opinion to it. Thus, I become a camera that photographs the scene without interfering or adding touches to it. Thus haiku is objective. I have been living in Haifa for several years. The beauty of the Sea and Mount Carmel provide me good sources of inspiration.